Halfway between Narbonne and Carcassonne, take the road from Lezignan to Fabrezan (where photography was invented - see museum).

Continue past vineyards, and climb past Camplong with its potent red wines (buy some!) , under the gaze of Mount Alaric.

Then onto Ribaute with its hidden chateau, following the winding road above the river Orbieu (good for swimming and cooling off in the heat of Summer) until at last you reach a superb viewpoint overlooking the idyllic village of Lagrasse.

Take a quick stop by the road if you wish to take a photo - see top right - (although there's not much room to do it!)

The village is famed for its Abbey, Medieval houses and streets, book and pottery fairs over the Summer months, and a lovely 12th century hump backed bridge. It is good place to explore anytime of the year and has a number of good restaurants.

The abbey, St Marie d'Orbieu, was founded in 799, with a founding charter from Charlemagne, and it became quickly one of the most important abbeys in southern France. It became pivotal in the politics and religious affairs of the south, being on the border of Spain and France. 6 abbeys, 25 priories, 67 churches became dependant on St Marie.

Nerodius, archbishop of Narbonne,was the founder and first abbot, adopting the Benedictine rule of St Benedict of Nursie. During the 17th century, after a long period of decadence, the abbey was absorbed under St Maur. This in turn initiated a building program including the archbishop's palace and current cloister. At the time of the revolution only 14 monks remained at the abbey (they left in 1792). In 1796 the Abbey was split and sold in 2 parts.

Notable are the Tower (16th Century), which is well worth the climb (230 steps), which gives a grand view of the village of Lagrasse, as well as the surrounding countryside. The Abbots chapel (1296), where one can see remains of a mural depicting the tree of life and the last judgment. The Abbey church with its stark walls from the 13 -15th century. The two cloisters (1760 and 13th century).

The abbey has a good gift shop, and plays host to an important book show and conference in the Summer. 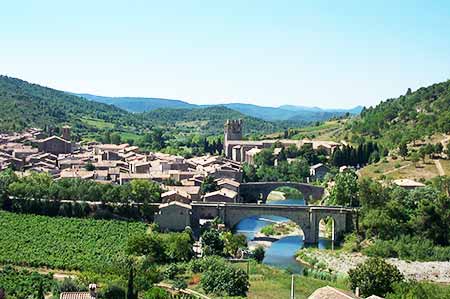 It is a pleasant walk if one leaves the abbey, passing between it and the river - past a series of allotment gardens, to a foot bridge / dam. That provides an excellent swimming spot during the Summer months and is a good place to cool off from the climb up the Tower.

From here one follows the road that is closest to the river, entering the old village, and soon reaching a splendid covered market, surrounded by 14th - 16th century houses. Narrow streets run off in all directions, filled with art and craft galleries, shops as well as a number of good restaurants.

However if one does not waver and continues in a fairly straight line, to the left there is pretty humped back bridge (12th Century) that crosses the River Orbieu, where one can often see bathers or people fishing in the deep waters

Places to visit near Lagrasse

The church at St Martin des Puits, with capitals from Merovingian times

The Chateaux at Termes (a good steep climb but a great view) and Villerouge (where the last Cathar Priest was burnt at the stake, - there is a multimedia installation telling his history - there is also a restaurant here that does Medieval feasts!)

Sculpture walk at Mayronnes (April to August) - enjoy a good walk in wonderful countryside (allow 2-3 hours), to see art and sculpture from talented artists of the region