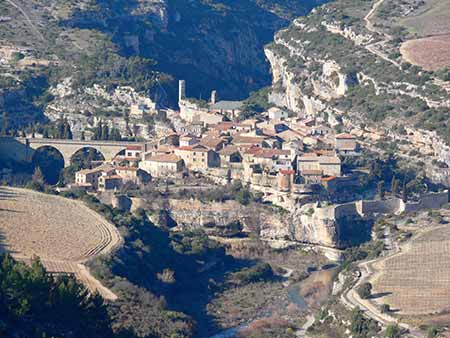 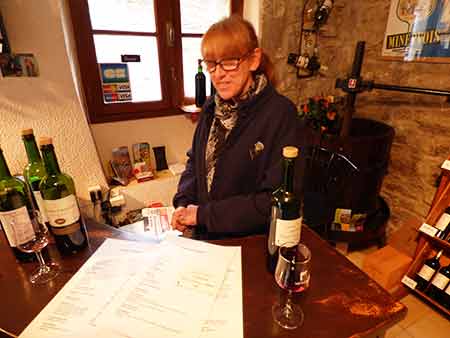 The road winds slowly up the valley from the Beziers Carcassonne highway, first climbing steeply then falling into the town of Aigues-Vives, that lies along the River Cesse. A river full of tricks up its sleeve as it disappears underground, in the heat of summer, in this wild landscape of Causses. Its gentle edges become sharp and defined as we go by La Caunette, tucked under cliff. Thin bridges tempt us to drive to perched farmhouses, but our aim is Minerve. Minerve a miraculous village perched over the meeting of rivers. Perched where rivers tunnel through deep gorges. Perched like a survivor, that it is, marking the massacre inflicted by Simon de Montfort during the crusades against the Cathars in France in 1210

With the backing of God and the Pope, with men hungry for loot and blood, Simon de Montfort laid seige, to the impregnable fortress village. And to speed things along he attacked St Rustique's well, the principal waters source for the village, found at the base of the village. Four catapults were set up around the village, -three towards the city gates and the fourth - the largest named "Malevoisine" to destroy the well.

The village was well protected with double surrounding walls, and overhanging ledges; but this did not stop the fear that Montfort gave. For the Viscount Guilhem of Minerve knew that the 200 men of his garrison couldn't resist the onslaught, if the gates should fall. And as the walls gave in of St Rustique's well, he negotiated the town's surrender. He saved the villagers and his self, but 140 Parfaits who had taken refuge, were burnt at the stake, because they refused to deny their faith. The burning of parfaits was the first in the crusade, a terrible act that was to be repeated for another 34 years until the fall of Montsegur.

Little is left of the fortress, except for the "candela" - a single slender octagonal tower. The village is a hodge-podge of narrow alleys, topped by a simple 12th century church that always seems closed. Nearby is a charming museum of full of figurines showing the history of the Cathars and Minerve. 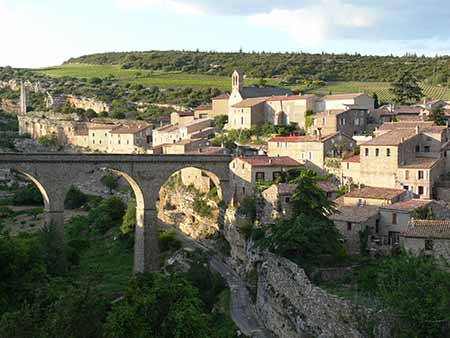 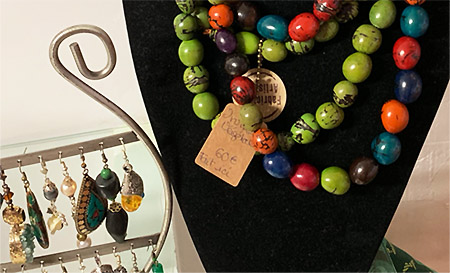 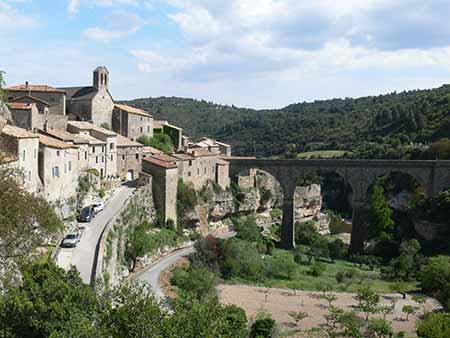 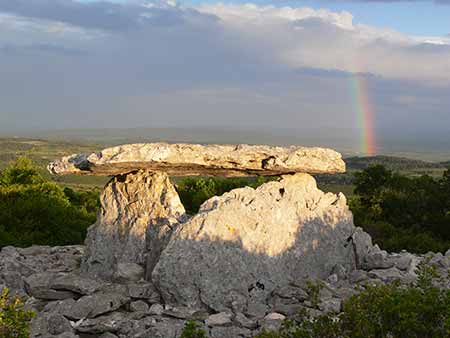 For excellent dining eat at Michelin rated Restaurant Relais Chantovent, reserve for a table on the new wide
terrace with lovely views over the river gorge.
17 grand rue, Minerve. 04 68 91 14 18.

Minerve also boasts a fine bookstore - Paroli - where you can also buy coffee - it has a good selection of new and used books everything from novels, art books to regional, with collectors items too. There is an art gallery upstairs.

Also there is Atelier des 3f, 7 rue des Matyrs - which has some fine jewellery and clothes created b43y Muriel and Carole, who expose their works and by others.

Wanting a bite to eat or a drink? Go round the corner to enjoy coffee, wine, beer, and bruschetta at the Chocobar.

Around and about the village are wonderful walks that test the soul and one's agility. Walks that skirt edges of cliffs, with drops to the churning of water in streams that run through small holdings. The river Cessiere tunnels under hill, next to the village, and one can, if the water's not high walk through, to yet another tunnel that breaks its way through yet another hill. The natural bridges provide the ideal background to grand spectacles of Son et Lumière in the Summer months.

Take a walk around Minerve in slide show.

Nearby Places to Visit

Driving or walking above Minerve, walking away from the tarmac road, one can find dolmens, majestic against the line of hills (left off the D 147, or higher up - in and around Bois-Bas) and the distant horizon of the Mediterranean, not far from caves painted in times even more distant.

Minerve, the jewel of a rock perched town, invites us to investigate the towns and country around. To drive to neighbouring Aigne, with its beautiful church, and streets shaped like a snail. To walk along the Cessiére, near Cailhol, and bathe in cool spring fed river. To drive in the idyllic valley of Brian, and the heights of Vélieux, or drive towards Caunes Minervois, and discover remote chapels, dolmens, and natural wonders, on the way home go to the Canal du Midi, and take in a walk and a meal perhaps at a restaurant and see the canal boats pass by.