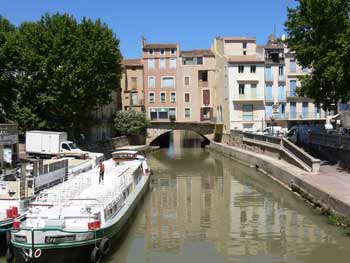 Canal de la Robine, once the River Aude or
Axat goes under the remaining arch on the old bridge 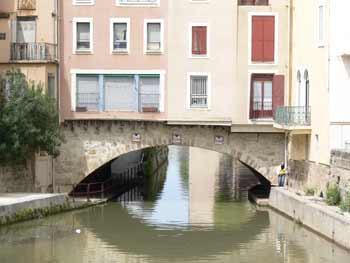 The old bridge once had 5 arches 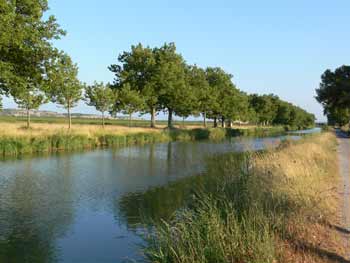 The Canal de la Robine, near Mandirac, as it goes
towards the `Mediterranean Sea 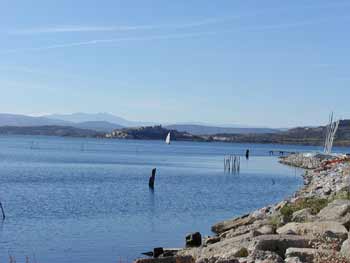 In the beginning Narbonne was nothing but marshes and pools, a mix of sea and sea shore - where the tribe Elisyques, had settlements between Cape Leucate and the mouth of the river Orb.

They built their castle fort, and main habitation at the oppidum at Montlaurès, whilst on the coastline - they built their market place where Narbonne is today - so they could trade with Phoenicians, Greeks, Etruscans, and later Romans.

The river then was called Atax - the river that was to become the Aude.

In 118 AD the Roman senate created its first colony outside Italy - Narbo Martius, on the crossroads between the roads Dominitiene and Aquitaine. After a rebellion in Marseille, the 10th Legion was sent to Narbonne to create a port.

At this time it was probable that the river Atax was straightened, creating in a manner the current course of the Canal de la Robine. The old bridge with its 7 arches that crosses the canal with shops across it - Pont Vieux, was no doubt across the ancient river way of the Atax. The change in the course of the river no doubt affected the silting up of the etangs creating the etang de Bages amongst others.

After the difficult years of the early Middle Ages, Narbonne began to prosper, with settlements on both sides of the river. There was direct trade with other Mediterranean ports. The river banks became busy with all manner of trades - with flour mills, and tanneries, and cloth manufacturers, all using the water.

Later in the 14th century Bages and other ports on the Etang, became places, where goods were transfered to smaller boats that fed the city.

For a thousand years only one bridge crossed the river.

Then in the 14th century 2 additional bridges were built, one near Pont Voltaire, and the other near where there is now the Pont de la Liberté.

During the 15th century the river became more and more silted up. Considerable work was done over the next 200 years to keep the lower river to sea operable, but the main bridge dwindled in size to just one arch from the many that were before.

With JP Riquet building the Canal du Midi, a branch of the canal was concieved, to follow the old gallo-roman created for barges exporting amphora from Salleles d'Aude, and to supplant the river at Narbonne.

By 1691 the first part of the canal was completed between Narbonne and Moussoulens known at this as Robine de Narbonne or Robine d'Aude or La Robine Neuve.

It took another 100 years to complete the connection with the Canal du Midi. There was considerable competition for tolls on the canal, and it was only by 1787 the first barge was able to go from Toulouse to Narbonne.

With the 19th century, there was increasing competition with the railways but it also was the heyday for viticulture (1872 -1900) - the wine industry was a full capacity - and the quays Alsace and Lorraine at Narbonne had numerous wine related businesses going at full throttle.

Now of course the Canal that once was the river Aude, is for tourist traffic with canal barges and boats; as well as for the leisure pursuits of walking, jogging, cycling and canoeing.