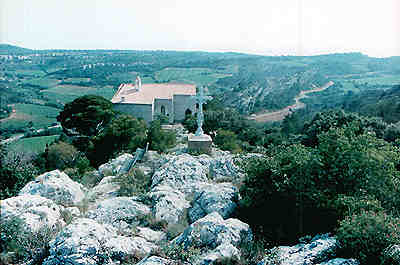 Chapel of Notre-Dame-de-Nazareth, near St Chinian

Just off a road climbing into the hills near St Chinian is this charming chapel, reached by a steep drive or on foot via stations of the cross. It is one of many chapels and religious sites in the area - each one worth visiting, as spiritual awareness complements praise of a glorious landscape.

According to the legend, in the year 840 the Virgin Mary appeared to a shepherd. However it was not until 1102 that mention is made of this sanctuary in the charter of the archbishop of Narbonne.

In 1120 after the return of the first crusade in the Holy Land the name of Nazareth is attributed to him. The Benedictine monks who founded the abbey of Saint-Agnan at the beginning of the 9th century, are certainly not strangers to the construction of the first chapel.

In 1789 during the Revolution, it became it was closed to worship. It was not until the beginning of the 19th century that it became the sanctuary that is there today.

Take the 9 km walk path from Saint-Chinian to walk to this beautiful chapel and views.

Interested in vacationing in the area? Stay at a charming village house in Saint Chinian with Romeo and Juliet balcony