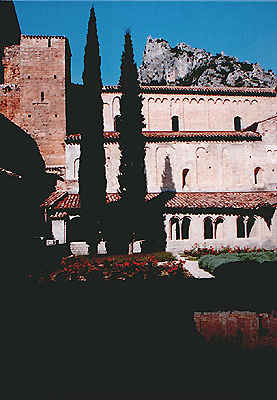 
Here is a church crying out for the return of some of its treasures from New York, to add to the beauty of this architectural gem of France.

(Parts of the cloisters are in the Cloisters in New York).

St Guilhem was a man of mythic proportions. He captured Nimes with Troy-like by bringing in his soldiers hidden within wine barrels. He saved Rome from a pagan army losing the end of his nose in the process. He escaped from imprisonment from a Saracen ruler, with help of the ruler's wife. In 806 he jacked it in to become a monk, and when he died all the bells in all the neighboring churches rang of their own accord, with no one pulling the ropes!