Enjoy the clear skies, the wines, where the sun shines in the Languedoc.

In the Minervois, near Agel, and St Jean de Minervois 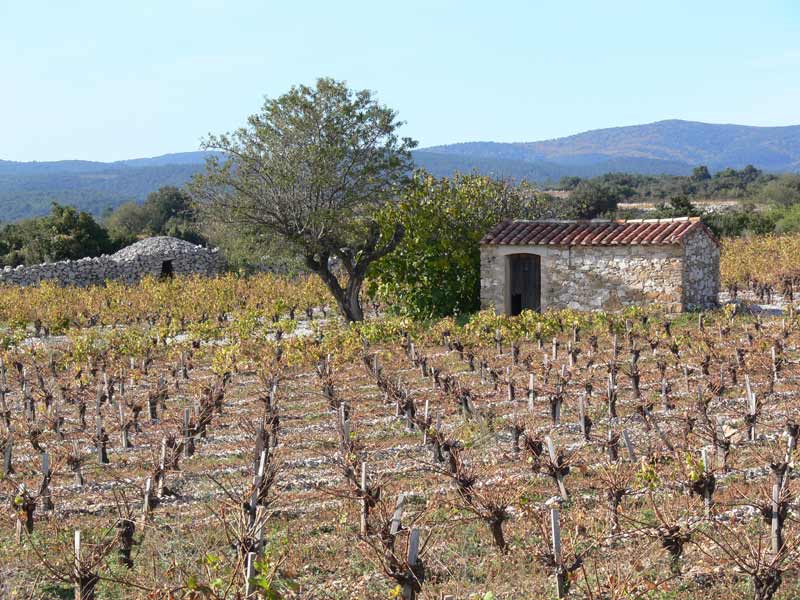 A day when you can dine outside, walk with zeal - Minervois vineyard near St Jean de Minervois

Languedoc and Minervois in October, and November - a Great Time to visit

After the grapes have been picked, the colors of the vines change quickly to deep reds, russet browns, and almost all the colours of the rainbow.

This is the time to visit, enjoy the light dry air, the scintillating rays of the sun, the glorious views, the Pyrenees climbing out of the hazy mists of autumn. This is a time to walk in the hills, to hear the sparkle of bird song, the rustle of wind through leaves.

This is the time to take a baptismal bathe in the Mediterranean beaches - fresh but invigorating. The rush carries you through to the wonderful wines that are for tasting and for sale in the thousands of vineyards in the area. The rush lets your imagination run along the tracery of cathedrals, abbeys, castles, that are here at every turn!!

The territory of the commune of SAINT-JEAN-DE-PARDAILHAN was detached in 1908 from the commune of Pardailhan (Canton of Saint-Pons-de-Thomières ). In 1936, Saint Jean changed the beautiful name of Pardailhan, and took the more commonplace of Saint-Jean-de-Minervois, mainly for commercial reasons of the wine trade; historically, Saint-Jean did not belong to the Minervois wine region.

The Church of Saint-Jean, called Saint-Jean-de-Dieuvaille , is located in a wild gorge near Barroubia (classified protected site). Mentioned in 940, the current building dates essentially from the 16th and 18th century.

As early as the 14th century the parishioners of Saint John claimed a priest serving at the church, and informed the Pope of passing through the region.

At the beginning of the 18th century, the church was transferred to the hamlet of Saint-Jean (now Saint-Jean-de-Minervois), Saint-Jean-de-Dieuvaille remaining a simple chapel.

What is true historically, is that the lord of Pardailhan took from the Middle Ages a seigneurial right on the wine of Saint-Jean and Saint-Martial (" the tasque on the wine " since the 14th century at least).

The last lord-baron of Pardailhan, was Thomas-Francois de Treil de Pardailhan, maitre d'hôtel of King Louis XVI at the court of Versailles, would have made taste at the royal table the wine of his estate; at least that's what a family tradition says.

I must thank this site: For very interesting information about the St Pons Area and History

Beyond this perhaps legendary anecdote, the town produces a remarkable muscatel , which obtained the AOC in 1949 (decree of November 10, 1949).

The area of ​​the appellation is very limited, about 160 ha. The allowed yield of 28 hectoliters per hectare is almost never reached because the soil is very poor and the fragmented plots are difficult to exploit. The average yield is 15 to 20 hectoliters.

Previous Photo of the Week