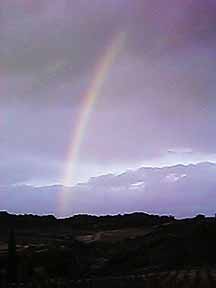 
As the new year turns, the Languedoc vignerons are busy pruning their vines, making ready for the pot of gold to glow in the year to come. There's often a haze from fires burning - set to rid dead leaves, overgrown bushes and cane, and then there are the winds and the storms that pick up the clouds, and send rain to punch out rainbows, glimmering in the lessening light at the end of day 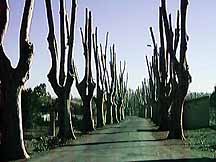 In many French villages they go in for severe pruning of trees in the winter months. Here in the canal village of Paraza, they look like hands reaching into the sky. 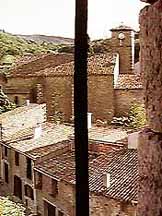 Villerouge-Termenes, in the Corbières reflects the character of the region in its mixture of rooftops and houses, with an old church and castle. In fact it seems at times that every village in Languedoc boasts a castle, or past history of one. 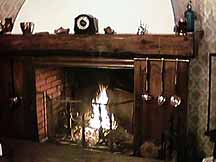 Fireplaces are traditionally favourites in houses in the Languedoc - in the winter months they provide warmth and a centerpiece to entertaining.Perhaps you can find one in France Rentals