The Guide Languedoc Photo of the Week June 8 1998 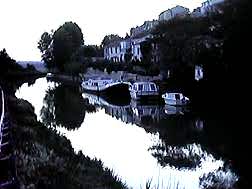 Dusk on the Canal du Midi

Dusk is a magic time in the Midi. Colors of village houses resonate against the failing light of the ever darkening sky. The hills, hazy, go from purple to red to blue, glowing from the warmth left from the heat of the day. Boats, and the reflections of families eating in rooms and on patios, reflect on the quiet water of the Canal du Midi. Frogs croak for partners as the village young skid around on motorbikes, their noise sneezing and snorting out into the fields

The Guide Languedoc Photo of the Week June 15 1998 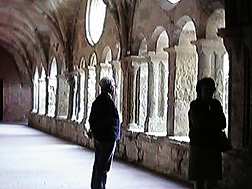 Valmagne Abbey, between Beziers and Montpellier

Visit Valmagne with the belief that wine making is a religion. As one enters the church, on each side huge wooden barrels are in the chapels each side of the nave. The cloister gives one breath to imagine the days before the church became the home for the wine cave. At the end of the tour, however you are tempted again to buy a bottle of delicious red wine to drink. What a great way to praise Valmagne, Wine, and a beautiful abbey! 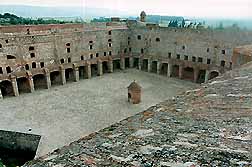 The castle at Salses has a modernistic flare about it, with curved walls designed so that cannon balls would bounce off it. It was built in the 16th century by the Spaniards to defend entry to Roussillon. Taking in the castle is a welcome break on the A9 between Narbonne and Perpignan.

Take more photo walks in the past! - Photo Visits in Languedoc and South France