Byzantine-style mural, the church at Cazedarnes, near Saint Chinian 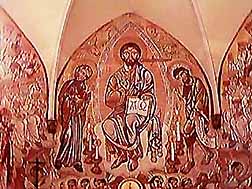 Byzantine-style mural, the church at Cazedarnes

It is well worth the visit to this church that sits astride a rise above the main road in Cazedarnes, quite close to the abbey of Fontcaude. The murals were created in the 60's with a verve and passion - that is beautiful and strong. The font is well worth a good look, with its base in a sunken floor of designs of fish swimming. 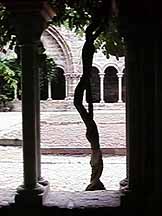 Even on a cloudy day, or when it is raining, Fontfroide Abbey, is an inspiration. The cloisters and abbey are breathtakingly beautiful, set amongst the steep hills near the Mediterranean coast. There is even a restaurant and rose garden for those that need to feed more than the soul. 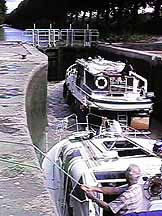 The Ecluse de Gailhousty, can get busy with boats coming up from Narbonnere dating back to 1780, where the nearby marsh or etang of Capestang was being drained into the canal, as well as doing double duty as a dry dock for boats in need of repair. Last winter this area was severely flooded after torrential rains nearly made Narbonne impossible to reach.